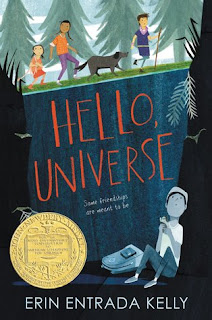 In one day, four lives weave together in unexpected ways. Virgil Salinas is shy and kindhearted and feels out of place in his loud and boisterous family. Valencia Somerset, who is deaf, is smart, brave, and secretly lonely, and loves everything about nature. Kaori Tanaka is a self-proclaimed psychic, whose little sister Gen is always following her around. And Chet Bullens wishes the weird kids would just act normal so that he can concentrate on basketball. They aren’t friends -- at least not until Chet pulls a prank that traps Virgil and his pet guinea pig at the bottom of a well. This disaster leads Kaori, Gen, and Valencia on an epic quest to find the missing Virgil. Through luck, smarts, bravery, and a little help from the universe, a rescue is performed, a bully is put in his place, and friendship blooms.

I would have liked to have seen more growth in Virgil, one of the main characters, in the book as well as more of a resolution in the end. I wanted there to have been consequences for a certain character that was a complete bully. I enjoyed the other characters in the story and how it represented how children are capable and that girls are strong and intelligent.