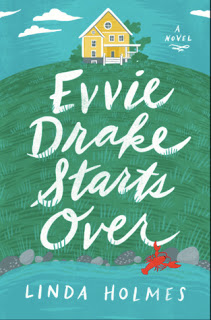 In a sleepy seaside town in Maine, recently widowed Eveleth “Evvie” Drake rarely leaves her large, painfully empty house nearly a year after her husband’s death in a car crash. Everyone in town, even her best friend, Andy, thinks grief keeps her locked inside, and Evvie doesn’t correct them.Meanwhile, in New York City, Dean Tenney, former Major League pitcher and Andy’s childhood best friend, is wrestling with what miserable athletes living out their worst nightmares call the “yips”: he can’t throw straight anymore, and, even worse, he can’t figure out why. As the media storm heats up, an invitation from Andy to stay in Maine seems like the perfect chance to hit the reset button on Dean’s future.When he moves into an apartment at the back of Evvie’s house, the two make a deal: Dean won’t ask about Evvie’s late husband, and Evvie won’t ask about Dean’s baseball career. Rules, though, have a funny way of being broken—and what starts as an unexpected friendship soon turns into something more. To move forward, Evvie and Dean will have to reckon with their pasts—the friendships they’ve damaged, the secrets they’ve kept—but in life, as in baseball, there’s always a chance—up until the last out.

I appreciated how the author didn't make this book overly angsty or dramatic. It was very straight forward with flawed characters that were believable people who didn't always say or do the right thing. I really loved Evvie because I felt like I understood her and her journey to feel like she was enough. I thought that the author did a good job of portraying abuse in a subtle way and I respected how she had the reader look at verbal and emotional abuse. It was interesting to me how each of the main characters were grieving things in their lives in different ways. There were different feelings to each and I thought that the author's take was an intriguing one. It seems to me that many people feel that they aren't grieving right because they don't cry or aren't sad enough so I appreciated the author's approach.